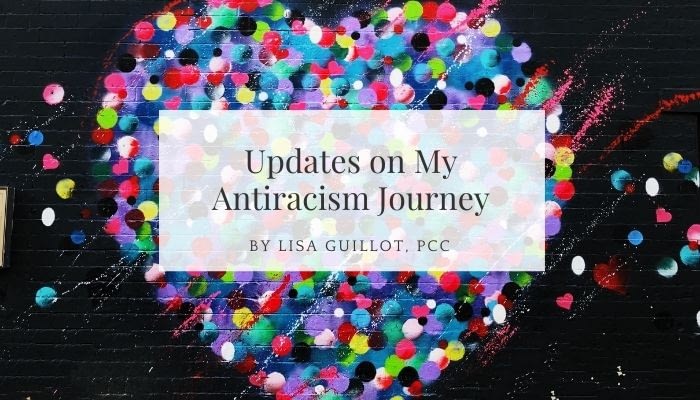 I am steeped in self-awareness work. Brewed, boiled, and roasted in it. And yet, I’ve learned that even with a commitment to mindfulness and introspection, I still have blind spots. Especially when it comes to privilege and antiracism work.

Throughout January and February, I’ve been participating in a series of workshops called White Leaders Working on Antiracism. We’ve role-modeled difficult conversations, listened to podcasts, and read eye-opening content. All while connecting with each other and the work that white people need to do to become better allies. (thank you Andrea Enright for sharing this great program).

My mom asked me, “Lisa, why are you taking this course? You’re the least racist person I know.”

To be honest, when I first started the workshop series, I thought I would learn some new ideas, leave with some tools on how to have race-related conversations with more heart. I’m aware of societal and cultural discrimination but didn’t think they directly impacted me, because — I’m privileged, white, and I’m not racist.

Here’s What I Am Learning and Unlearning

I learned it’s no longer enough to not be racist, it’s time to actively be an antiracist.

I learned it’s okay to be in the messy middle of not knowing the right thing to say or do.

I learned to step into conversations with white people when they don’t know what to say either, and to keep the conversation going.

I learned that slavery started, as an institution, because of power — to create, generate and hold onto power.

I’ve learned that modern marketing techniques were used to promote the dehumanization of Black and Native Americans. Often using the same propaganda techniques that we condemned dictators for. And, today, we continue to use demoralizing images of Native Americans in professional sports.

I learned American culture is white culture, but we have an affinity for certain elements of Black culture. I love me some 90’s hip hop.

I learned corporate America is based on white supremacy.

I learned not to shy away from the term white supremacy.

I learned most people believe that “Only MY logic is logical.”

I learned I need less righteous thinking like, “I’m not like that,” and instead, to hold myself accountable with more compassion and connection for BIPOC experiences.

I learned to take action that aligns with love and humanity and embodies everyone’s experience — especially when it’s uncomfortable.

I learned it’s a journey.

My inner perfectionist wants to get it right and say the right thing so I don’t look stupid. But, my daughter, the 7-year-old sage that she is, told me this morning, “Mommy, mistakes are proof you are trying.”

Action looks like writing this article on LinkedIn, with over 40 comments, because hey if we can’t have real conversations, where else are we going to transform corporate culture?

READY TO SPARK CHANGE IN YOUR LIFE AND LEADERSHIP?

Being a magnetic and intuitive leader has its challenges, but here’s the truth: your potential is bigger than what you currently believe. This is your one-time invitation to transform your mindset of what’s possible for you. Book your introductory coaching session with Lisa today.

Want to Hit Your Target? Focus.

What I learned from Mercury retrograde as a magnetic leader…

I'm not your typical coach. I guide heart-centered professionals to design their life + personal brand from the inside out. Get started by joining me for an introductory coaching session for sound advice and a fresh perspective.